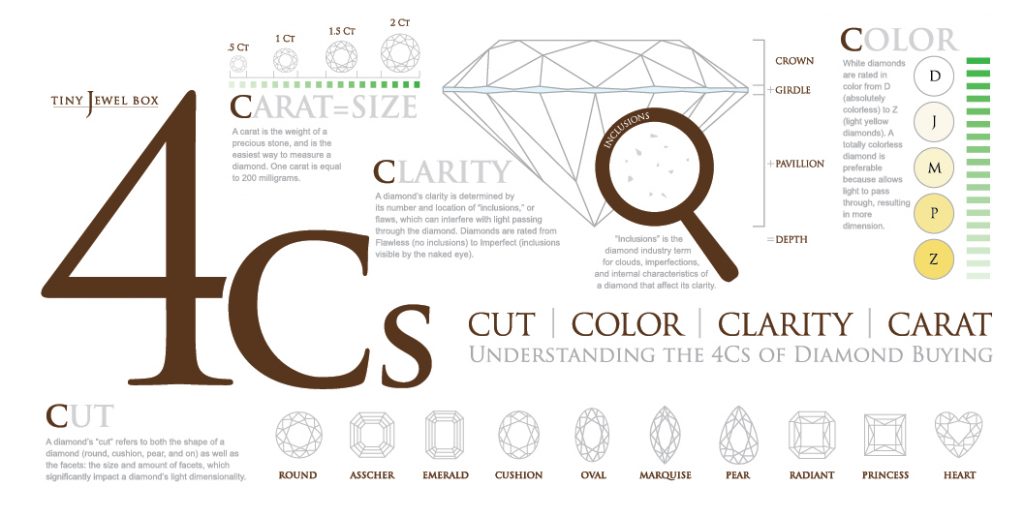 Refers to the degree to which a dimaond is colorless. The closer a diamond is to colorless, the more rare and valuable it is. Diamonds are graded on a color scale established by the Gemological Institute of America (GIA). Grades D, E, and F make up the colorless range which are very valuable. The Near Colorless Range of G, H, I, and J is very popular and offers a lot of value. Color differences can be very subtle and grading is done under measured lighting and compared against a “master diamond” for accuracy. This color chart is representative of the color grades of a diamond. *Note that this chart does not apply to fancy color diamonds such as yellow, pink, and blue which have their own system for grading. For diamond shapes like round brillaint, emerald, asscher, radiant, cushion we would recommend a J color or above. For elongated diamond shapes such as pear and oval, I color and above is a good option. Do note this also fluctates based on the diamond and your color sensitivity.

Refers to the presence of inclusions in a diamond. Inclusions are natural identifying characteristics such as minerals or fractures, that appear while the diamonds are being formed. They may look like tiny crystals, pin points, clouds or feathers. Inclusions are ranked on a scale of perfection known as the clarity scale. The scale ranges from F (Flawless) to I (Included) and is based on the visibility of inclusions at 10x magnification. In determining a clarity grade, the GIA system considers the size, nature, position, color, and number of clarity characteristics visible under 10x magnification. Some inclusions have little effect on the attractiveness of a diamond. Inclusions such as an excess of clouds could impact the dispersion of light making the diamond less brilliant. As a standard we would not recommend diamonds within the included clarity range since the imperfections would be visible to the naked eye. Clarity effects each diamond’s cut and shape differently so it is important to go on a case by case basis. For Brilliant cut diamonds we would typically recommend at least an SI2 or above depending on the exact diamond.

The cut of a diamond refers to the exact proportions, quality of polish and the arrangment of a diamond’s facets. A diamond has facets that allow light to enter it, become refracted, and exit in a rainbow of colors. As illustrated below, when a diamond is cut to ideal proportions, light will then reflect from one facet to another and disperse though the top of the stone, resulting in a display of brilliance and fire. Diamonds that are cut too deep or too shallow lose light, resulting in less brilliance, fire, scintillation, and value. Keep in mind that GIA only provides a concrete cut grade for round brilliant cut diamonds. All other shapes will not receive a cut grade however we can ascertain the cut by its proportions. When it comes to fancy shape diamonds we will know more about its shape based on its length to width ratio. Without seeing the diamond physically, it can tell you what to expect from its overall outline. In our loose stone video gallery we feature tons of loose diamonds with quality comparisons.